E-bikes: Friend or Foe in Virginia? 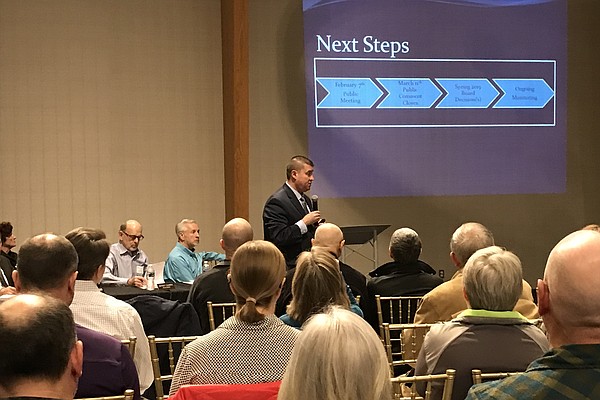 "Electric-assist bikes are not coming, they are here," said Chris Pauley, director of park operations, Northern Virginia Regional Park Authority (NOVA Parks). The recent popularity in electric-assist bicycles, e-bikes and the fact they are not allowed on trails in Fairfax County and NOVA Parks prompted NOVA Parks and Fairfax County Park Authority to take steps to understand the issues and then share facts with the public and listen to their comments.

On Thursday, Feb. 7, NOVA Parks and Fairfax County Park Authority Northern Virginia came together at a joint public meeting in Lorton to present their proposed recommendation to modifying §1.14 B. (3) of the Park Authority Regulations. "Because both state law and technology changes, we have to update our regulations, and that's why we are here tonight," said Michael Nardolilli, chairman and representing Arlington on the board of directors for NOVA Parks, addressing the gathered crowd of approximately 80 individuals. "We are seeing a positive shift in society where bikes are not just for fitness and fun, but increasingly for transportation," he said.

As the presenter for the public meeting, Pauley described to the crowd how e-bikes are replacing traditional bicycles for both recreation and transportation. "(They) create an inclusive environment from the recreation perspective. People from all ages and abilities are being reintroduced to riding ... As a transportation option, people are riding further and riding more often if they have an e-bike," Pauley said.

PAULEY EXPLAINED the steps taken on the issue as it relates to the parks. NOVA Parks worked with Toole Design Group, a consulting agency with 16 years of experience. Its stated focus is "... developing creative yet practical solutions that move people more efficiently while improving the quality of life of the community.”

According to Pauley, one of the most critical issues was to look at user and safety behavior, as it was not something other localities had done yet. "We are on the cutting edge,” said Pauley.

Fairfax County Park Authority took a different approach, Pauley said. They established a staff led e-bike study team, which, among other things, reviewed jurisdictional practices. It also "... looked at local bike associations and talked with them about what they saw.. .(and) the different impacts on their facilities," said Pauley. He added that the county developed recommendations in concert with state law by working with the county attorney. "A pretty involved process from both ends," he emphasized.

Pauley circled back to user behavior. He requoted key monikers stated in comments provided by people who were opposed to e-bikes on the trails: "The trails are too crowded; these bikes are too fast.” Pauley disputed the concerns. He stressed their white paper studies showed e-bike cyclists and traditional cyclists behave the same. "They don't behave any differently. They don't behave any better, but also don't behave any worse," Pauley said.

Pauley confirmed that on the roads e-bikes tend to go a little faster than traditional bicycles but he surprised many in the audience when he said, "On multi-use trails, they are a little slower." Crash rates are similar he added. As for other people on the trail, Pauley revealed people did not recognize when an e-bike was on a trail with them. "Studies showed that most people if you didn't tell them there was an e-bike on the trail, didn't know that it was there," he said.

Pauley highlighted the Virginia Code authorizes the park authorities to regulate uses of all land and facilities under control of the authority. "But there is a caveat. We can't create any regulation that is in conflict with state law … state law is at the top; it's the king of everything," said Pauley. "Park regulations fall in the middle ...The way it works is our park regulations are enforceable by law. It is a Class IV misdemeanor. So technically someone riding an e-bike yesterday could be cited with a Class IV misdemeanor. That's probably not where we want to be."

STATE LAW is pretty wide-open, said Pauley. He cautioned, "That might not be the best fit for some of our trails from the perspective of safety." Pauley said the proposal they were presenting that evening was to strike the motor-assist piece to clearly define mopeds are not permitted on trails, only where motor vehicles are allowed to go.

Pauley stated that they added a section that would define what a power-assist or e-bike would be. “That’s basically operable pedals, with an assist motor," he said. "The proposal would be to discount the e-bike as a motorized vehicle thereby allowing it to travel any place a traditional bike would be able to go," Pauley said.

In the draft guidelines, Pauley said they defined an e-bike, its performance level, where e-bikes can be operated and how it can be used. "This is a significant first step, a positive step to get these people back on the trails, get them into the parks, get them to be inclusive in their recreation, help them with the lifestyle they want to live and get them back on the bike to enjoy themselves," said Pauley.

The Altered Sections of the Proposed Amendment Read:

E. E-Bikes. Electric power-assisted bicycles (e-bikes) equipped with pedals that allow propulsion by human power are considered bicycles and non-motorized vehicles for the purpose of these regulations and are allowed in the same places that traditional, pedal-powered only bicycles are allowed.

Viewpoints: Comments from the Public

"I was asked by NVRPA to bring a couple of different styles of e-bikes that comply with the recommended guidelines in that they are less than 750 watts, don’t go over 20 mph and do not have a throttle but require the rider to pedal in order to get any benefit from the electric motor."

"It is my position as a resident of the county and position of FABB to support NOVA Parks proposal to permit Class 1 and Class 2 e-bikes in the same parks anywhere traditional pedal-powered bikes are allowed … Safety on bicycles will always come down to education and culture and not the types of bikes we ride … Bad behavior is equated to the individual, not the equipment."

"The Bull Run Occoquan Trail is a single track, and even the new improved sections of the trail have such tight turns and short sight lines that you can't see what's coming around the next bend ... The Trail at Fountainhead (Regional Park) shouldn't be a multi-use trail until you correct it. I have been frightened by e-bikes coming around a sharp turn."

"(E-bikes) open the door for more people of all ages to ride a bike, more often and for longer distances and durations. Fantastic opportunity for exercise enjoyment of the outdoors and alternative transportation … We must hold them (e-bikes) to the same rules as those on conventional bikes.”

"As a teenager, I was fine riding my bike. Fast forward 40 years and bad knees ... I'm on an e-bike. I'm discovering so many cool neighborhoods, so many ponds, so many lakes ... If more people can become happy people, happy residents, happy cyclists, like myself, let's make the world a happier place by accepting this proposal.”

"The definition in both the regulation and suggested amendments have a huge loophole. Namely, they simply have pedals that ‘allow’ for human propulsion but they do not ‘require’ them for propulsion … 20 mph is just the suggested speed limit as far as bikes go … I'm worried about dealing with the throngs of high-speed assisted-riders, plus 750 watts zipping through the remote loops of Fountainhead in an hour and the slippery slopes of some e-folks de-restricting their speed."

"The e-bike has given me this whole new level to go riding with my friends. I had a knee issue … that's why I acquired my e-bike. It allowed me to do everything I wanted to do and still enjoy the outdoors … I ride at a lower (tire) pressure. My mountain bike tires do not rip up the trails. It is not a throttle. It is pedal-assisted.”

"We see a story-a-day about e-bikes. How they take down the barriers for many people … The mountain bikers we've seen as customers are just like any other person on a bike. They learn to ride; they respect the trails ... The only thing I would push for is user education on the trail. I'd love to see more speed limit signs on the trail, the W&OD.”

"There are so many park authorities ... local, national, regional that have been putting their head in the sand for a while, and not really addressing 'the elephant in the room.’ That is e-bikes, and the revolution is happening before us … It is a paper issue, not an equipment issue, and we should work on that … It's not just e-bikes that are here; we are talking about scooters, boosted boards, and all manner … I think the policies would be more inclusive if they were considered."