‘Thank You for Your Service’: Pence Observes Veterans Day in Arlington 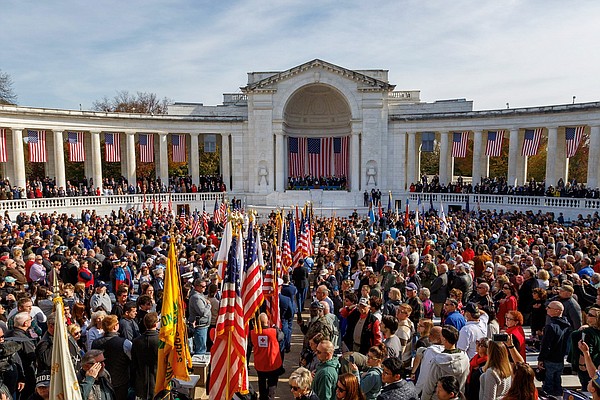 Vice President Mike Pence placed a wreath at the Tomb of the Unknown Soldier followed by remarks at the Memorial Amphitheater to commemorate the 66th Veterans Day National Ceremony held Nov. 11 at Arlington National Cemetery.

“It is the 11th hour of the 11th day of the 11th month,” remarked Pence, the son of a Korean War combat veteran and father of a Marine Corps aviator. “It was 100 years ago on this day that America first celebrated Armistice Day, marking the day in 1918 when the guns of World War I fell silent.”

More than 5,000 veterans and supporters turned out for the ceremony, which commenced precisely at 11 a.m. with a wreath laying at the Tomb of the Unknowns and continued inside the Memorial Amphitheater with a prelude concert by the United States Army Band, “Pershing’s Own,” and a parade of colors by veterans' organizations.

“Today, here at Arlington and all across this nation, Americans will gather to pay a debt of gratitude to those who answered the call to serve in the armed forces of the United States,” Pence said. “From Bunker Hill to Belleau Wood, from San Juan Hill to Saipan, from the Coral Reef to Kandahar, nearly 50 million men and women have donned the uniform of the United States. And nearly 20 million of you still walk among us today. As we speak, a new generation of American heroes and veterans is being forged around the nation and around the world. On this day, it is our duty to tell your story.”

Originally designated Armistice Day by President Woodrow Wilson in 1919, the observance to honor all veterans was replaced by Veterans Day in 1954.

“There is a day in May when we remember those who served and did not come home,” said Pence. “But today, in cities across the nation we pause to remember all those who served in uniform and did come home. For those veterans gathered here and those looking on, from the heart of a grateful nation we thank you for your service.”