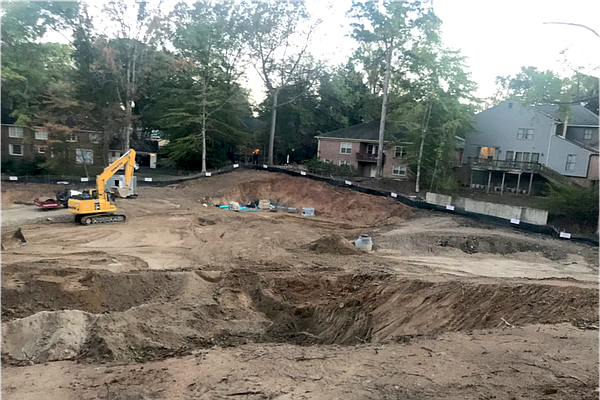 One day in early fall, heavy equipment came and "just started pulling out the trees on a large wooded lot in Chain Bridge Forest." Russ Pommer says, "We always knew the property owned by one guy since 1987 would be developed."

Then it went up for sale in early 2018. Carol Lynn MacCurdy who lives at 3853 N. River Street remembers her husband wrote to County Manager Mark Schwartz on Sept. 8, 2018 highlighting his concern with the need to protect diminishing forest and the County’s lack of an innovative and flexible approach to development. She says he received no response.

Pommer says, "One day in mid-summer a nice developer came by and said he was going to do a high end development, wanted it to look nice, would keep the trees to the extent he could." Pommer says there was never a red alert.

Then one day Pommer noticed a County Land Disturbing Activity permit on the property posted on June 28. Soon after heavy equipment came and in a few days had pulled out everything including 10-12 trees that were 100 years old near their house.

McCurdy who lives next door to Pommer and has been leading the neighborhood efforts drafted a petition Sept. 15 and sent it to the County Board members.

Pommer says, "We didn't know what to do. "All our trees were down."

Sept. 19 Phillip French, another neighbor, followed with a letter.

They received a detailed response on Oct. 15 outlining the County’s complex and challenging review and approval process with background and timeline on this project. Greg Emanuel, Director of the Department of Environmental Services, and Claude Williamson, Director of the Department of Community Planning, Housing and Development, signed it. It concluded, "We are balancing those concerns with our obligation to enforce the relevant ordinances that govern the situation."

The neighbors thought these setbacks seemed out of compliance with the Arlington Zoning Code, which Pommer says requires a 25-foot setback in rear. "I thought they would have to apply for a variance and we would have a chance to object. But I learned that wasn't the case after the fact because people who approve it have a very liberal view of setback." He said he was told there is a lot of creativity allowed.

MacCurdy says, "There are setbacks of only 8 feet from our houses. No trees or privacy for anyone." She continues, "Our neighborhood is ruined forever by complete outsiders have no ties to Arlington. They took down over 200 trees to build four McMansions. Their principal investor grew up in Argentina but lives in Bethesda. The two developers are from Romania – one of whom has a financial services firm tied to investors in Transylvania, Romania. The irony is not lost on us."

French appeared before the County Board on Oct. 19 representing the residents. According to Pommer, Dorsey said, "Sorry, this is a Zoning Board problem; there is nothing we can do." So Pommer wrote to the Zoning Board but says he doesn't expect a response.

In early November, MacCurdy followed up with a series of questions to the Arlington County Manager's office about legal rights against developers who killed two large trees on her property, refusal to protect trees on neighboring property and responsibility for dead trees or property damage. The County responded on Nov. 7, "The County cannot provide you with legal advice and any impact to trees between private properties should be resolved between owners. We recommend getting an estimate from a private arborist."

Kit Norland, a core member of the Arlington Tree Action Group, points out that the County has given free rein to developers on the same day the Eco-Action hosts a talk on biophilia (the premise that humans possess an innate connection to the natural world) – with the Board planning a resolution on becoming a biophilic city by the end of the year. "Pretty rich juxtaposition."

County Board member Libby Garvey visited Chain Bridge Forest on Nov. 9 at the neighbor's request to view the devastation. County Board Member Matt De Ferranti has also visited the site.

After her visit, Garvey sent out the picture of Chain Bridge Forest residents with the following comment, "Saw by-right development that clear cut large lot and is harming trees near site. Need to examine regs that can discourage such projects."

Pommer concludes, "My biggest disappointment is that I have lived in Arlington a long time, paid taxes and been satisfied with the schools, services. I was surprised that this whole process is skewed. It is designed to help developers build more houses."