Two residents dedicate themselves to cleaning up the banks of the Potomac. 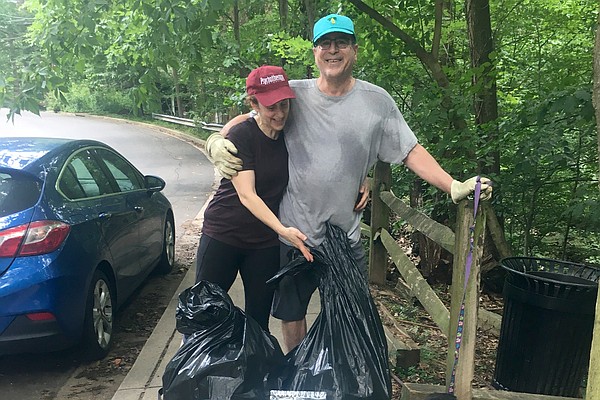 You’ve seen the trash along the banks of the Potomac and you might even have picked up a plastic bottle or bag two to bring home for recycling. But two Arlington residents have taken plogging (jogging while picking up plastic) or in this case, pliking, to a new level.

Karen Hannigan and Joe Schwartz, of Bluemont and Lyon Park neighborhoods, were seen lugging Santa-Claus sized garbage bags down the street adjacent to Donaldson Run on Friday morning, June 19. As they staggered under the load of their sacks, they gave a cheerful thumbs up to local residents who thanked them for their work cleaning up the banks of the Potomac. One passer-by asked if they were “River Keepers” – an organization that works to protect the public’s right to clean water.

“Nope,” they said cheerfully, “We are just two people that think cleaning up trash is a necessary thing.”

The two Arlingtonians have a system: they collect some trash, leave it in a garbage bag near an intersection leading out of the park, with a sign on it. “Putting contractor bags at hotspots where we see a lot of trash, then asking hikers to take the trash with them as they leave, and we find very often the hikers do just that.” They’ve noticed that by putting the bags out, more of the fisherman and picnickers use the bags too, and often make an effort to show Hannigan and Schwartz that they are picking up after themselves.

Hannigan and Schwartz patrol the area in Arlington that runs from Potomac Overlook to Chain Bridge. They would love to see other residents adopt other trails, so the load can be shared. It took them three hours to collect two huge trash bags of garbage ranging from recyclable bottles and cans to dirty diapers. Their most disliked item to find on the banks of the river? Broken glass. “But we never shake our finger at those who leave trash, and try to make them feel bad. We just show them what we are doing by doing it.”

“Trash is getting worse along the Potomac,” Hannigan said. But she doesn’t resent cleaning up.

“I’m happy to do it. Of course, we prefer people take their trash away, but we think the more they see us doing this, the more likely it is that they will.”