Arlington activists canvassed in NC, and in Virginia’s 5th District for Cameron Webb, among others. 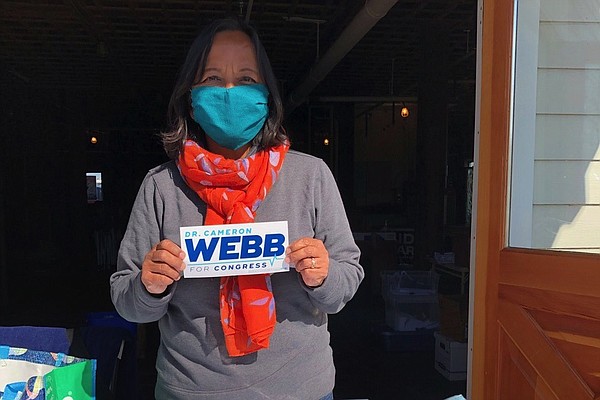 Sandra Garcia opened the chained door of her apartment in a low-income area of Raleigh, North Carolina. She was high-cheekboned, tan, pretty, with an open countenance and good English. Her toddler played by her side. “No,” she said to the volunteer who had finally found her at home after three passes on three days, “I did not know my mailed ballot was rejected. No one told me.” She was anxious to have her vote counted, and took down the address where she could vote early in person, the only sure way to get her ballot in by the time she had been reached. She was out the door, with her toddler, a few minutes later, walking to the nearest voting location a mile away.

Edith Perry, who lived out in the country on a dirt road in a small clapboard house that looked like it had been there for a while, said she had been contacted, but didn’t know what to do. “We don’t have internet out here,” she said, referring to the directions she had received to check a site. “What was wrong with the ballot?” she asked. “They said something about the witness signature… but you know, it’s odd. Who is choosing the ones that get rejected? There are rumors going around.” Asked what kind of rumors, she looks around, and then says almost reluctantly: “They say maybe they are looking at certain names and addresses for voters they don’t want to vote.”

Almost 20,000 ballots in North Carolina have had “deficiencies” that require a “cure,” or fix, to ensure those ballots are counted in the election results. An army of volunteers, many from Arlington and other areas of Virginia, travelled to cities throughout North Carolina to help locate the voters whose votes would not be counted unless they were “cured.” Many voters could not be reached by telephone, and so canvassers donned PPE and headed out the door. According to the North Carolina Democratic Party, as of early on Nov. 2, of 19,927 early votes rejected in NC, 15,569 were cured. But there were still 4,300 ballots to go, and that number was expected to keep rising right up to Nov. 3.

“I don’t know but something fishy goin’ on here. What was wrong with my ballot? Why it matter if the witness didn’t put down her zip code?“ asked Lizzie Smith plaintively. She was grateful, however, to the volunteer who had stopped by to help her get it right. She was able to send in a fix, providing the full zip code, but her son had just learned of his ballot rejection and had to drive to vote in person as it was too late to mail.

Activists in North Carolina note the state makes it unnecessarily difficult for people to vote by mail, and this year, the election officials are disqualifying a large number of attempted mail-in ballots for “deficiencies.” Suspicions like Smith’s were born out in some counties, where government data indicated ballots cast by Black voters had been flagged for errors at a rate higher than those of White voters, according to the cure organizers.

Lynda Fiori, a middle-class voter in her 60s, was irate that she still didn’t know whether her ballot was “cured,” because she kept on getting her door knocked on even though she had sent in her affidavit. She suspected someone had made it harder for her to vote because they thought she was hispanic. (She isn’t.) She shook her head in dismay.

North Carolina Democrats were able to get the names of voters whose mail-in ballots had been disqualified and could be cured, and then set about trying to contact these voters. There is litigation about different ways to cure ballots, so canvassers were out to get as many voters as possible to “make a plan” to cure their ballot in the way that is indisputably the most effective: go to an early voting center, have the defective mail-in ballot cancelled, and vote early at the site. Otherwise, the process of signing and witnessing an affidavit, faxing it, or doing it on line, could end up with the ballot being rejected – again.

North Carolina’s ballot curing process had been put on hold since Oct. 4 due to ongoing litigation regarding the procedure for fixing problems in absentee ballots. That litigation was recently resolved. The new procedure allows voters to fix some, but not all, absentee-ballot problems by submitting an affidavit called a Cure Certification.

Ideally, the county board of elections would have sent the voter either a Cure Certification or a new ballot, depending on what the problem was with the original absentee ballot. The voter would receive this by mail, phone call, or email, and would have to quickly complete it and return it to the County Board of Elections.

But as of Oct. 28, some voters had not been notified, or new voters had been rejected, this time too close to the election to allow for turnaround time. The list of rejected ballots changed every Wednesday, with new lists adding to the workload. On Oct. 26, 1,000 new names were added to the list in Raleigh. The week before it had been different cities.

Some of those whose doors were knocked were irritated. “Am I allowed to vote early in person if my absentee ballot was rejected? Won’t I be accused of voting twice?” said one recent citizen from Africa. Even after being assured that this would not be the case, he just shrugged, turned away from the door, and muttered that he would wait for the ballot cure certification to arrive in the mail; he was frustrated.

The North Carolina State Board of Elections says if the status of your ballot isn’t ‘Accepted’ or ‘Accepted – Cured,’ you can vote early in person – even if you sent in a cure certification or a new ballot. North Carolina has electronic voting records. The poll worker would be able to look up that the ballot was not accepted and allow you to cast your ballot.

One of the organizers of the ballot-cure canvas urged canvassers to tell voters to vote early in person or on the day of the election because “with all the legal battles in play we don’t know whether a legal battle could happen after the election which would invalidate a ballot cured by affidavit or corrected on-line.”

That was fine, except for voters like 94-year-old Amanda Davies, who lived in an assisted living facility. “They won’t let me go out of here to vote because of the pandemic.”

Some of the rejected ballots were college students who couldn’t be reached, or get home to vote.

At a small house on a lonely back country road, Lucinda Packer opened the door with curiosity. She told the canvasser she had been notified, just the day before, by another canvasser, and understood what she had to do, but she hadn’t done it yet because she didn’t want to go out of the house by herself. She smoothed down her apron — she looked like someone who could cook — and her brows knitted in concern. She was spry, tidy, happy to connect, and while her teeth were gone, her eyes twinkled as she said, “I’m 85, see, and I don’t feel comfortable going out of the house alone. I called for a ride from a friend, but I don’t know if that will happen. I was hoping you were my friend, stopping by. But I’ll be okay if I can’t vote. I’ll just accept it. I feel that there are things I just can’t change anymore. I can’t do things like I used to.” Packer had all but given up on fixing her vote. But the canvasser had a list of rides to early voting and said someone would make it happen. And two days later, Lucinda Packer cast her early vote.

The ballot cure team, many of them from immigrant families, working from their homes on zoom, were excited to see the contact rate for the canvass at an amazing 42 percent, much higher than normal. The canvass was getting results. Hundreds of people were coming off the list as they either cured their ballots by mail or voted in person early.

Arlington volunteer Annette Lang of Virginia Democracy Forward and 31st Street Swing Left, said the ballot cure was one of the most rewarding things she had done this year. Volunteers like Lang, Rose Fabia of Arlington, and Jessica Clark of Vienna weren’t done. After the early voting closed on Oct. 31, there were still canvassers headed out the door to knock on doors where no vote had been registered, and telephone calls to those who could be reached that way. Clark, who was certified as a list cutter, said “As of Nov. 2, we have only 1,769 votes to cure.” But there were more coming.

After three days of canvassing, whether down gravel roads where share-croppers had built shacks in the early 1900s, or trailer parks, with dirt roads so rutted it was hard to drive a car on them, where the wooden entry steps were soft with rot; whether in crowded one bedroom “garden apartments” with children’s bicycles and toys out on the stairwell and a sign saying: “Please don’t knock. I work all night,” canvassers knew firsthand, these were the Americans who had been left behind, or kept down for generations. They were caregivers, nursing aids, field hands, lawn mowers, and cleaning staff. They were in welfare motels, or in neighborhoods with “checks cashed” and ‘Picasso Pawn” shops instead of banks and malls. Some were in middle-class African-American enclaves where the American Dream had taken root … but their votes still weren’t being counted. They were people who wanted to have a voice in the election, and who, thanks to the efforts of the North Carolina Cure Canvas, would get that voice.