Arlington Divided Over Amendment One Issue

Which is the real anti-gerrymandering vote? 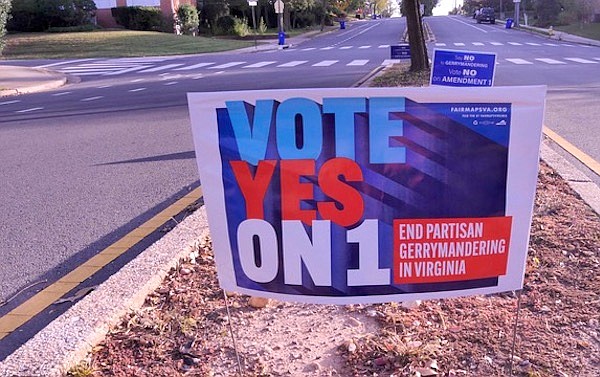 At a dinner party — held outside — last Saturday night, five Arlington Democrats talked about how they had voted on Amendment One. Three were for the amendment, two were against. One had based her decision on the fact the ACLU supported it; two said it was “better than nothing.” One had based his decision on the opposition to the amendment by Arlington Democrats, and the final “no” had read extensively about the pros and cons. That discussion made it clear well-meaning Democrats could say they had voted either way and feel they had voted against Gerrymandering. But had they?

THERE WERE SOME good reasons to vote yes, as articulated by State Sen. Barbara Favola (D-31), among others. The proposed amendment puts citizens at the table with legislators for the first time; 8 legislators, 4 Republicans and 4 Democrats, and 8 citizens, would discuss boundaries, and disputes would be settled by a Supreme Court of Virginia-appointed “impartial” decider.

For supporters, another plus in the amendment is that it would establish specific voter rights protection for minorities into the State constitution for the first time.

And supporters say that the deliberations would be transparent. Open meetings would take place across Virginia and all data coming out of the process would be publicly available.

Lastly, defenders say it would get the maps drawn fairly in 2021 and not delay the process another ten years.

BUT THOSE WHO OPPOSE the amendment say it’s not at all non-partisan: it leaves the Republican minority and conserative judges on the Supreme Court with too much power. Only nine Democratic legislators supported the passage of the amendment this year. “We can do better next year,” is the refrain of opponents. They point out that on the commission, any two members from the same party and the same chamber could block maps they don’t like, opening the door to gamesmanship.

Arlington Democrats believe adopting the amendment will not end gerrymandering. It leaves the Virginia Legislature in control of the redistricting process. Voters should choose their legislators, not legislators. The opponents say if we vote NO now, then in 2021, the nine criteria outlined in House Bill 1255 and Senate Bill 717 would govern redistricting. If the amendment passes, those two bills do not bind the Virginia Supreme Court.

Opponents point out the Virginia courts have shown repeatedly they will intervene in electoral matters to advance Republican interests. They are unlikely to suddenly adopt a neutral position on disputes.

Opponents believe racial concerns are not adequately addressed. The Virginia Legislative Black Caucus opposes the amendment because it doesn’t do enough to ensure diversity on the commission itself or prohibit racial gerrymandering. The commission's eight citizen members would be recommended by legislative leaders and selected by a committee of five retired circuit court judges.

Del. Rip Sullivan (D-48) voted against the Amendment this year, calling it one of the hardest votes he has ever had to cast. Del. Patrick Hope (D-47) said he realized at the last minute how flawed it was and voted against it this year. Both delegates think new lines can be drawn in 2021 without delay. Legislators who opposed the amendment noted how much it had morphed during the process to get it passed, making it less non-partisan.

Some opponents also note the Amendment was first passed by the Virginia General Assembly when Republicans still controlled the State legislature, and last year, only support from the Republican minority allowed the measure to pass, clearing the way for a vote on the ballot on Nov. 3. That means 46 out of 55 Democrats were against it.

Election about Elections, Voters to determine how redistricting works next year: http://www.connectionnewspapers.com/news/2020/sep/23/election-about-elections-virginia/