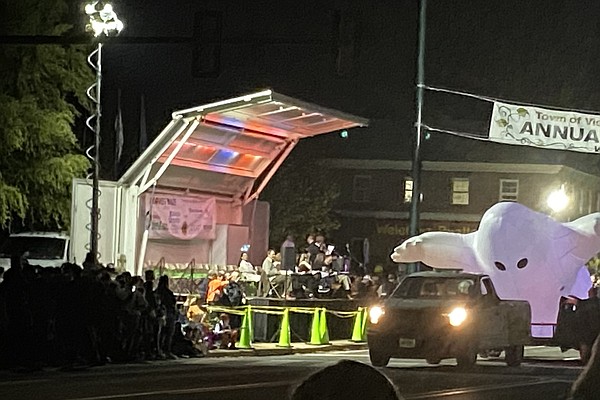 The Town of Vienna has been holding a Halloween parade for local children and their parents since 1946, marking this year's event as the 76th Annual Vienna Halloween Parade. The 2022 parade had the theme "Time machine: Vienna in the past, present, and future."

Leigh Kitcher, a 30-year leader and dedicated volunteer in Vienna, served as Grand Marshall. She is recognized for her leadership roles on Historic Vienna, Inc., Ayr Hill Garden Club, and National Capital Area Garden Club boards. "Her leadership on the Liberty Amendments Advisory Committee and Facilitators groups in 2021 resulted in an astonishingly successful inaugural program including 65 events presented to more than 22,000 people," according to the Town of Vienna.

The Vienna Police Department and the Fairfax County Police Motor Squad were the first two participating groups in the lineup of 82 groups for the 2022 Halloween Parade. 2022. Traditionally held on the Wednesday evening one week before Halloween, this year's parade lasted approximately an hour and a half.

The Ghost Balloon by Title Sponsor Virginia Tire & Auto proved a big hit with the spectators, as did the James Madison High School "Pride of Vienna" Marching Band. While the parade participants were not permitted to throw candy or hand out any items due to safety concerns, the Town gave out 1,000 Halloween Goody Bags at the end of the parade route near Vienna Elementary while supplies lasted. The half-mile-long parade route ran down Maple Avenue, from Branch Road to Center Street, providing plenty of curb-side seating for all.